Lest We Forget - Get practising for Monday :) 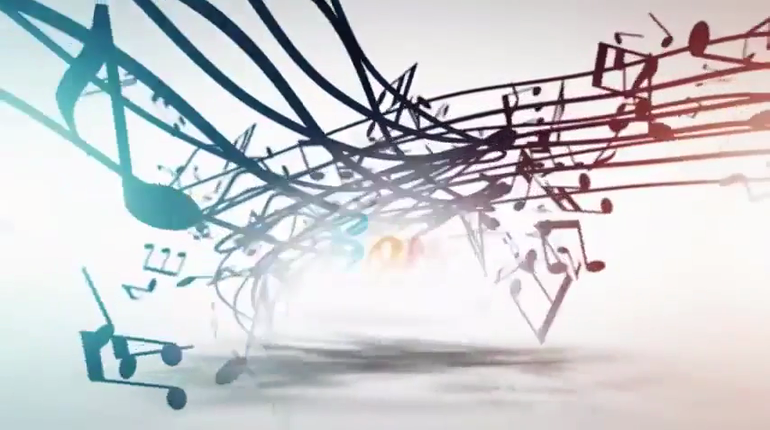 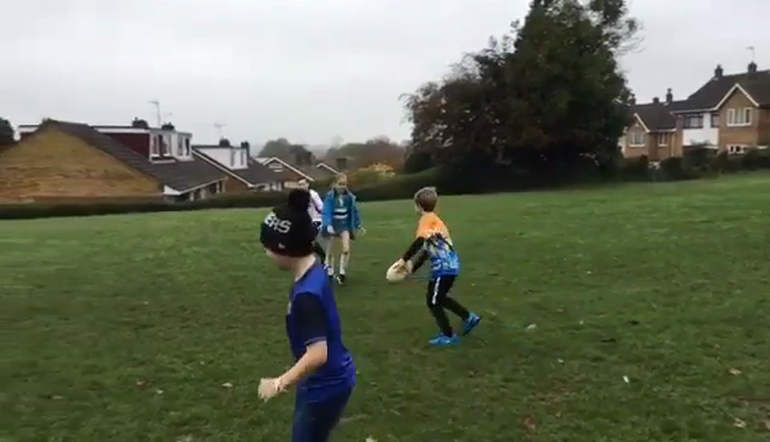 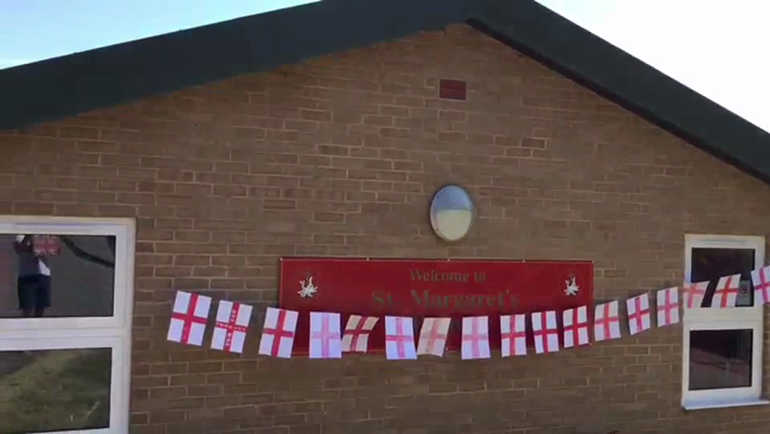 On Children in Need day, children dressed in spots and bought Pudsey biscuits which raised £394.71! 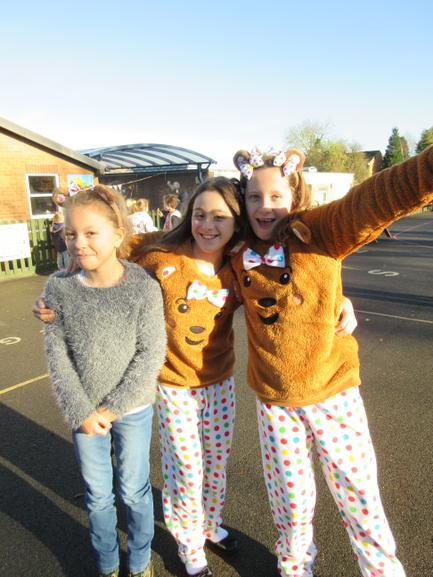 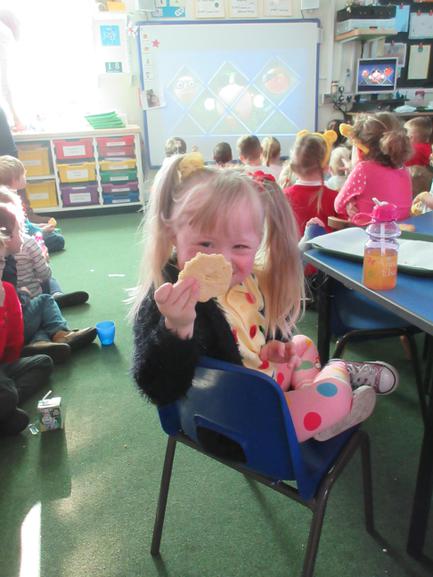 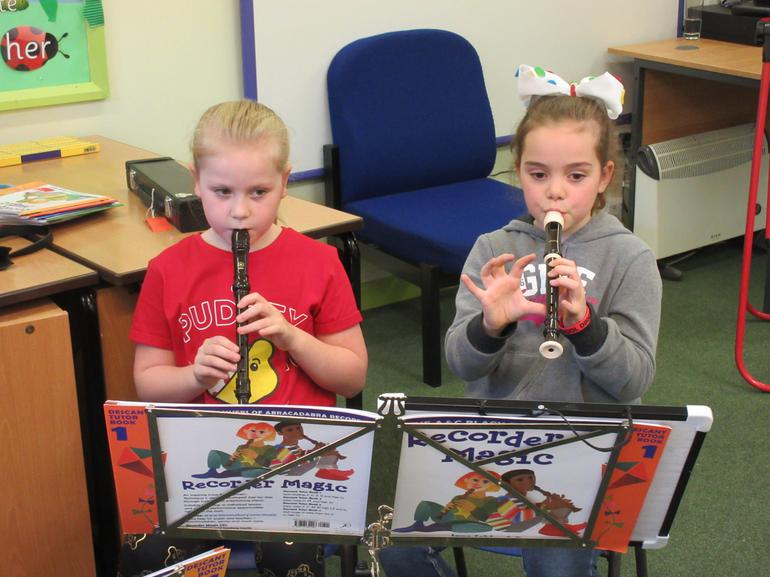 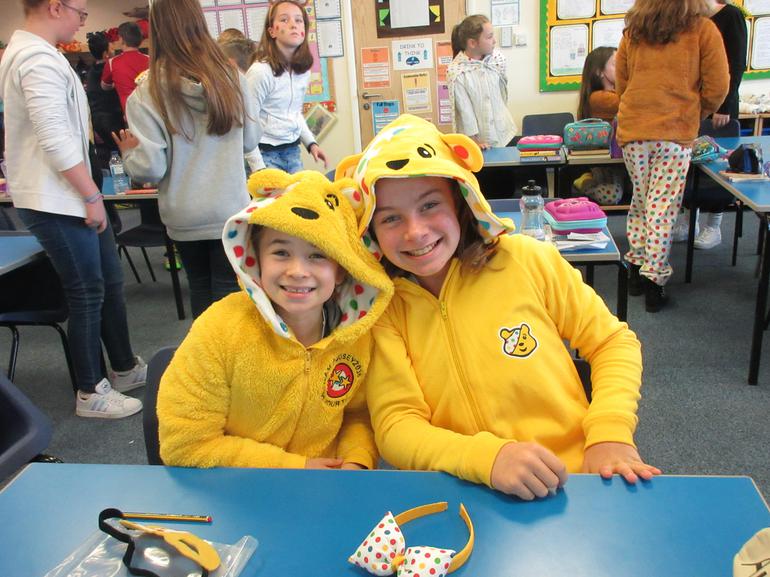 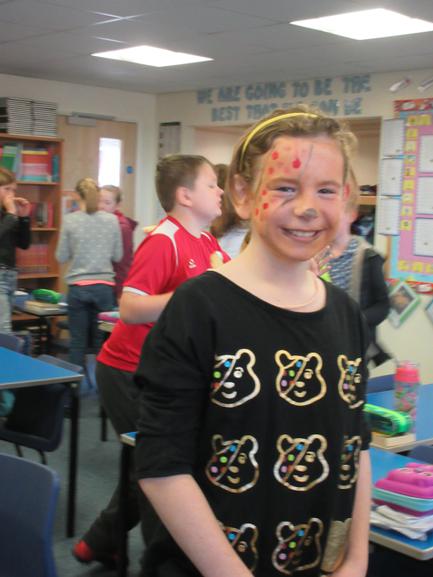 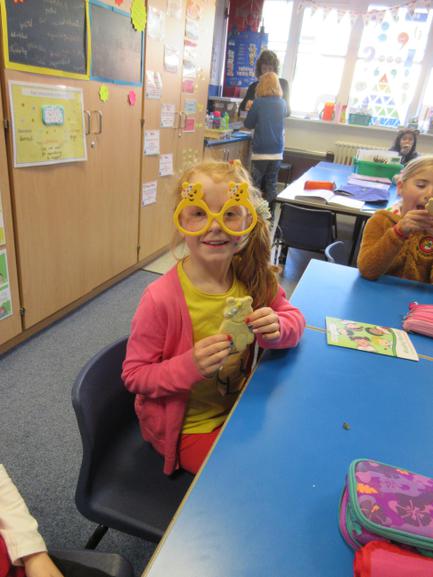 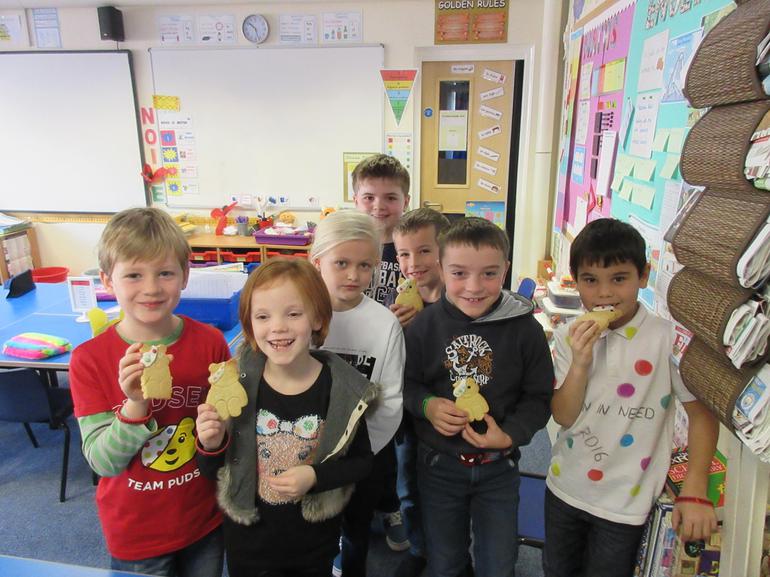 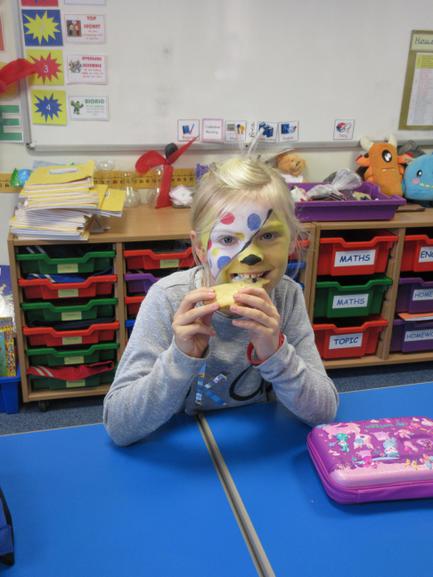 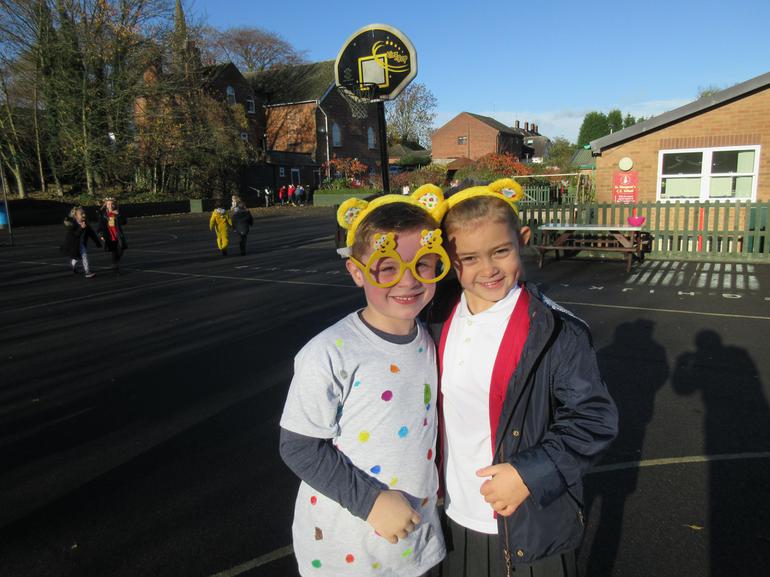 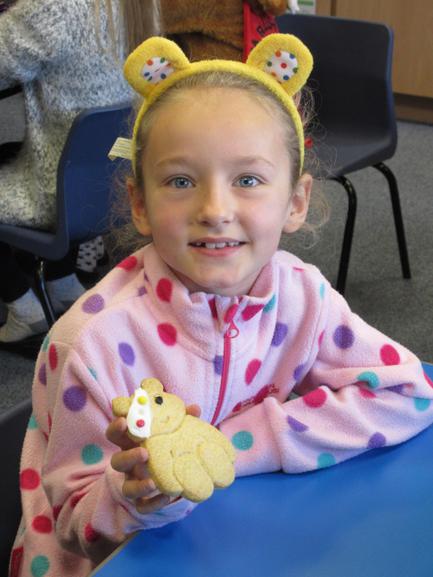 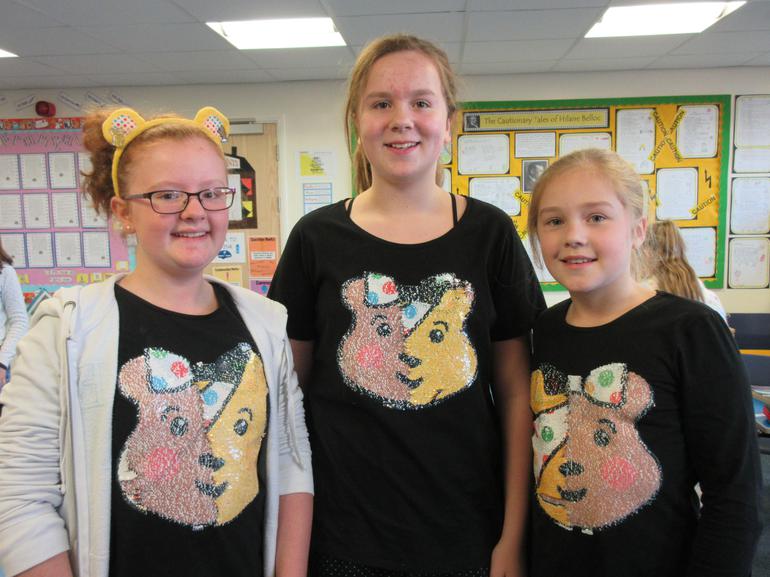 Our Trip to Hinckley Hub

On Wednesday 4th November we went to the Hinckley Hub for a local democracy event.  First we went into a conference suite, the tables were set up neatly with drinks, snacks and stationary that we were allowed to keep. Each desk had awesome, high tech microphones that we were allowed to talk through, they were synced to massive television screens that showed everyone in the room us talking. All of the present councillors, including the Mayor, introduced themselves and told us about their jobs and places in the council. After that we joined with another school to talk about the roles of the government, the County Council, the Borough Council and the Parish council. We also considered what characteristics a councillor needs to have. Next we had a picnic lunch with all of the other schools and free cookies! After lunch it was straight back to work (Rhianna's tooth fell out during the Mayor's speech), we had question time with the Mayor and councillors. The council are considering Elliot's request for a Wagamma in The Crescent. Finally we learnt about voting and how councils and debating affects our lives, we enjoyed voting on questions such as,

"Should children aged 10 be allowed to go to the park on their own?"

We had a fantastic day, Rhianna hopes to be the Mayor when she is older, Elliot has his eye on Downing Street and Thomas is keeping it real.

Thank you to the Council for such a great experience, we can't wait to do an assembly to share what we've learnt with the rest of the school.

We hope you enjoy reading our blog.

Year 5 teach Year 1 about the Holy Trinity! Year 5 and Year 1 worked together on Friday to make friendship bracelets and create art work together.

Year 6 researched how many languages are spoken by children and staff at our school. 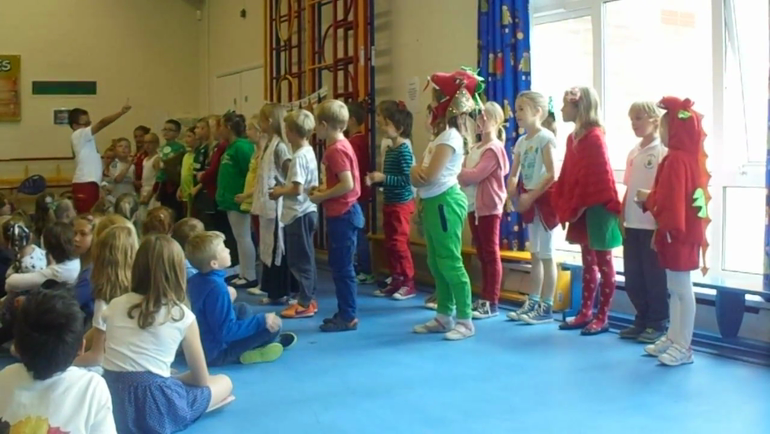 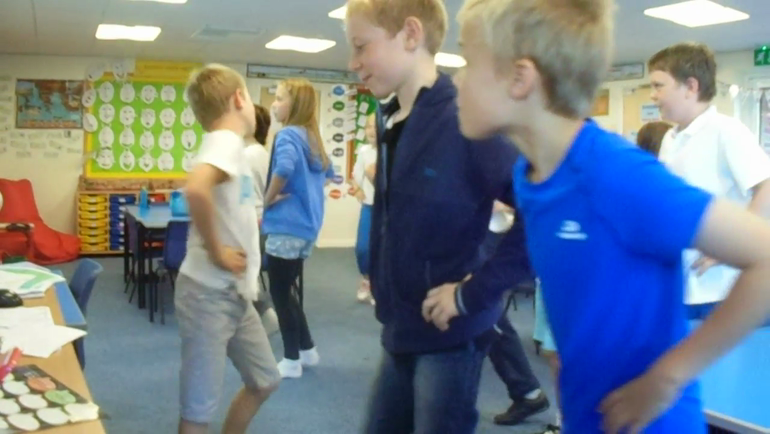 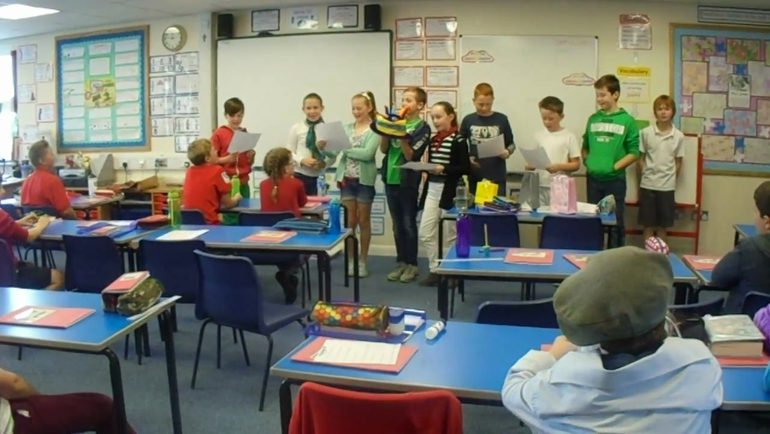 The children have worked diligently over the past few weeks to prepare for the production this week.  We have some extremely talented children in Key Stage 2.  The actors, singers, soloists, dancers, props directors and technical assistants all performed amazingly well for all three performances and, despite the intense heat of both evening performances, put on a fabulous show.  We have received numerous comments from proud parents, grandparents and members of the audience - all incredibly impressed by the children's talents.

We would like to thank all the staff involved in preparing the show as well as personally thank Mrs Hare for painting an amazing back drop and Mrs Short for making many of the costumes!  Stoke Golding is full of talent! 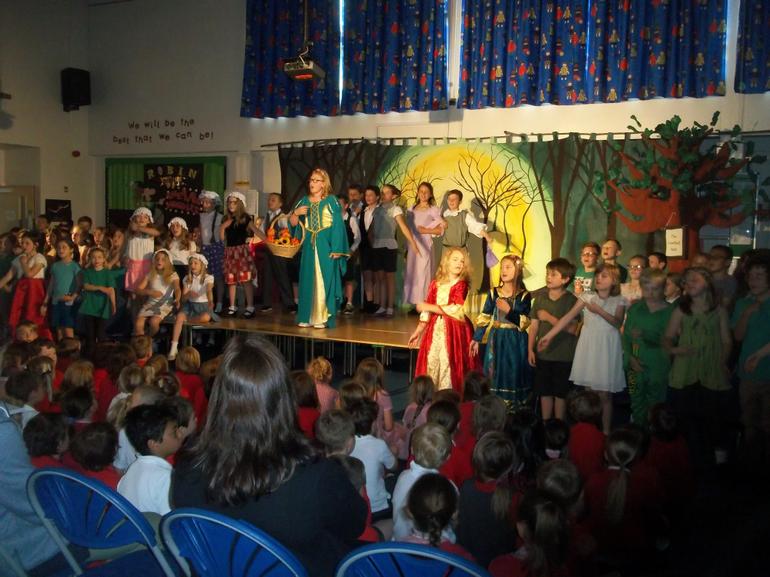 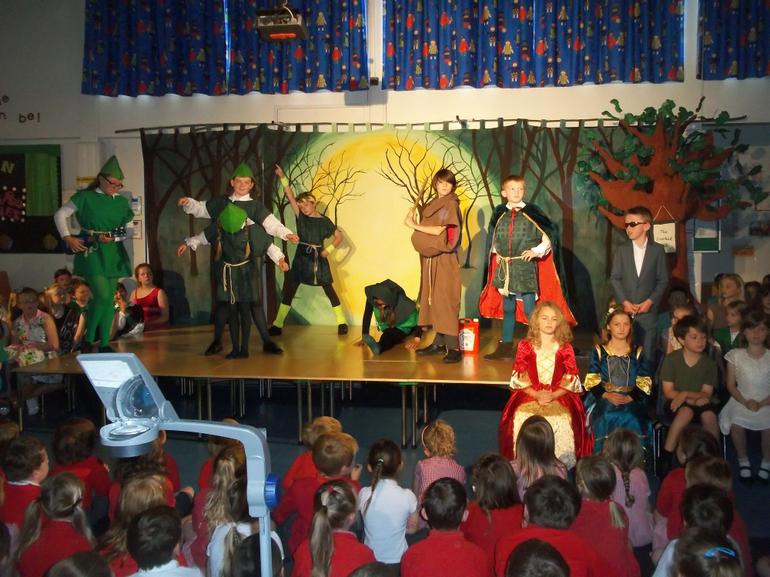 Year 5 make and eat lunch with the Mayor and her consort - including strawberries freshly picked from our school allotment!

The Green Rangers held an assembly to tell the school about ‘Walk to School Week’ and their ‘Park and Stride’ initiative.

They explained that we are trying to reduce congestion around the school, be more considerate to our neighbours, to reduce carbon emissions by using fewer cars and also to be healthier by walking to school.

See the attached article below for more information.

Year 6 have enjoyed finding out about the main parties and their leaders in this year's general election.  The children worked in groups to investigate the parties' manifestos and produced party political broadcasts.  The children were then able to vote at the mock polling station.  It was great to see the younger generation, often criticised by the media for not showing an interest,  demonstrating a detailed knowledge and understanding of policies, as well as an overwhelming enthusiasm for politics! I am sure we have a few future MPs amongst our current year 6 class.  The children are excited to find out the result from the official general election this week and to see if our class vote corresponds with the national vote.

On Tuesday 28th April, volunteers from National Grid and other kind people, came to our school to improve the playground and gardens. They also helped to create a new allotment area for us to grow and enjoy some delicious fruit and vegetables. Year 2 went out to investigate what was happening and recorded the changes by taking photographs of everybody working really hard! Look at the changes...

What a fabulous week the children from Stoke Golding have had.  As Stoke Golding is the birth place of the Tudor Dynasty, and with the 'Battle of Bosworth' taking place just outside the village, we have been really lucky to be involved in all sorts of events leading up to the reinterment of Richard III.

On Sunday 22nd March, children from St Margaret's went to Dadlington Village to form a guard of honour as the bones of Richard III were brought through on route to Leicester Catherdral.  The children were an absolute credit to their families and school with many people commenting on their outstanding behaviour.

On Thursday 26th March Miss Steele along with Lucas and Chloe from Year 6 attended the actual reinterment at Leicester Cathedral.  We were extremely lucky to be invited and the 2 children chosen to represent the school were voted for by the children.

The photos below are just a few from Dadlington on Sunday 22nd March and Leicester Cathedral on Thursday 26th March.

This morning Year 1 and 2 went outside to look for signs of Spring. However we didn't only discover daffodils, buds, new life, we also found...a DINOSAUR EGG!

A large yellow egg was found hidden on the playground behind the bin, near the climbing equipment. The children were very surprised and immediately began wondering which dinosaur had made the nest and laid the egg.

Suddenly some children noticed footprints, surrounded by a chalky dust which appeared to be heading towards the nest from the Sherbourne Road gates...how strange! After LOTS of discussion and suggestions we agreed that the footprints and egg must belong to a pterodactyl. Unfortunately we could not find any more clues as to the whereabouts of the mother.

While we were talking about the egg, Mrs Read looked by the pond (near the year 3 classroom) and noticed footprints in this area...so we went to investigate further. We think that the mother dinosaur had been hunting for food, probably fish for when the baby hatched.

When we returned to the classroom we wrote a story about this unusual morning and the mystery egg!

On Friday 20th March, a group of 7 Year 5 pupils were invited to spend a day enjoying a variety of different Modern Languages activities at Dixie Grammar School in Market Bosworth. The day started with a continental breakfast of croissants, pains au chocolat, baguette, cheese and hot chocolate! We then sampled Chinese counting and writing, Hungarian culture, singing and dancing, French singing and German games and animal names, as well as baking biscuits from other countries and making international bunting. After a delicious lunch we played French cricket and showed parents what we had been doing during the day. 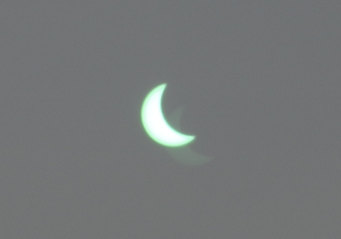 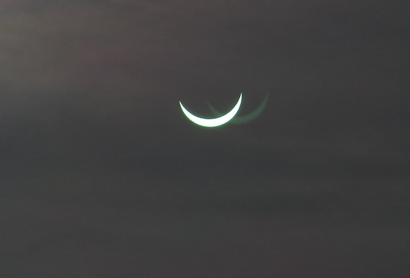 On Monday morning we invited all parents and carers to a grammar morning at St Margaret's.  Mrs Tomkins and some of the Year 6 children gave a short presentation about grammar and the changes to the new National Curriculum to parents.  Parents were then invited to go and visit the children in classrooms who were working hard and demonstrating how they apply their grammar knowledge.  The photos below show a huge range of activities from Foundation Stage all the way to Year 6.  A big thank you to all of you who came to support the morning, the feedback has been really positive.

In their RE lessons year 5 are learning about what it means to be a Hindu, as part of their investigation into Hindu worship they have been visiting our own Hindu home shrine. They had a great time and thoroughly enjoyed the experience. Following their visit to ‘show off’ their knowledge they wrote a letter to Miss Wyllie instructing her how to create a home shrine for year 4.

Next week, year 5 will be teaching EYFS about how Hindus worship at home.

Year 5 investigate what it means to be a Hindu

This morning we held a maths morning in school.  It started with a 30 minute presentation to parents about changes to the maths National Curriculum, and how we teach maths in school.  We talked a lot about fluency, reasoning and problem solving and parents were encouraged to go into the classes and ask the children how they know the answers!

Below are photos of the morning with the children at work with some parent help.

Thank you to Mrs Patullo, our Lay Preacher from the church and Mrs Nelson our RE governor for accompanying us on our visit and for answering so many of the children’s thoughtful questions.

Please click on the pages to look at pictures and images of what your child has been doing at school.

Unfortunately not the ones with chocolate chips.

Some cookies are necessary in order to make this website function correctly. These are set by default and whilst you can block or delete them by changing your browser settings, some functionality such as being able to log in to the website will not work if you do this. The necessary cookies set on this website are as follows:

Cookies that are not necessary to make the website work, but which enable additional functionality, can also be set. By default these cookies are disabled, but you can choose to enable them below: